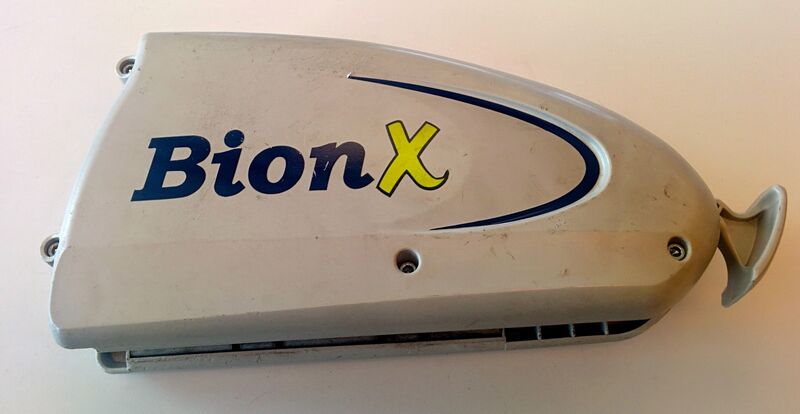 This is the starting point.  This is a 36v, 9.6AH BionX battery pack.  It clearly has a battery in there somewhere - so, this being a dead pack (there’s a running theme in packs I deal with here - which is, “I don’t tear apart working packs”), it’s time to dive in and see what’s inside it!

Keep reading for the teardown!

The bottom of the pack has the mounting rail and serial number.  The interface to the rest of the bike is on the right side of it.

With the three bolts out, the pack can be pried apart.  The mounting rail comes off, and the insides are visible.  The connector for power and communication is well waterproofed at it’s entry to the pack with a rubber gasket.

With one of the sides off, the insides are visible.  It’s mostly battery (as should be expected).  The battery management system is present at the bottom of the image.  Obvious on the BMS is a fuse of some variety or another.

Pulling the pack out and flipping it up, the labels and wires into it are visible.  Let’s see what it says!

Standard warnings apply.  Unfortunately, I’m about to violate the “Don’t dismantle” instruction.  As is normal for these pack teardowns.  Maybe “Don’t dismantle unless qualified” would work better.  Or “Only allow trained technicians to dismantle.”  Though I’m not sure I’m either one of those…

I do wish some of these relevant warnings would be posted on the outside of the pack.  Things like “Don’t charge below freezing” and “this pack is not good for extreme cold” would be very useful for those in the midwest, or at least would suggest taking the pack in and letting it warm up before charging.  Lithium batteries don’t handle temperature extremes very well, and are often physically damaged by being charged when too cold (lithium plating being a common issue).  Yes, I’m sure they’re in the manual where nobody ever reads them…

Here’s a closer look at the BMS.  There’s a lot of complexity in there.  And a beeper.  Which, apparently, can go off for quite a few months before draining the pack fully.

Back on the battery pack, in the middle of the ground wire, there’s what looks like a thermal cutoff or fuse glued to the pack.  I assume this opens if the pack gets too hot, though I have no idea at what temperature, or if it’s resettable.  If anyone has a few spares, I’d be happy to test them!

There aren’t many wires into the actual pack.  There’s a large red, black, and yellow wire.  Nothing that looks like sense wires for a BMS.  Maybe there’s a balancing circuit inside the pack.

Splitting the shrink wrap, there’s… well, huh.  Interesting.  I wasn’t expecting that.  There are a lot of positive and negative wires within the pack, and what appears to be a series wiring of a bunch of cells (based on the short strips only connecting two cells).  Odd…

Further into the pack, there’s a lot of tape.  And a bunch of parallel wires coming from the end.  They’re connected to each other, so this is definitely not what I was expecting.  It looks like each set of two rows is in series - very strange!

With the shrink wrap fully removed, it’s clear what’s going on.  This pack is a 10S6P pack - but the cells are wired series first, then in parallel.  The underside of the pack makes it clear.  The inter-row connect at the bottom pairs two rows of 5 into a 10S unit, and there are 6 of them in parallel.  Each two rows makes an independent 37v/1.6AH unit.

Midway through the pack is a temperature sensor.  It shares a negative with one of the battery terminals, and is just wedged into the center of the pack - it looks like a normal thermistor.  Also highly visible here is the hot glue holding the pack together.

And, with the leads desoldered (it sure didn’t feel like lead-free solder, FWIW), the pack is free.  The voltage here is not pretty.  It’s around 0.7v - per 10S chunk.  This pack is stone dead.

So, what’s in this pack?

It’s also, apparently, somewhat self-balancing.  This means that as cell state of charge increases, they charge somewhat less efficiently, so a set of high quality cells, matched from the factory, should stay reasonably balanced in operation.  Given how dead this pack is, I can’t really speak to it’s balance, but that’s the theory, at least, and explains the lack of sense wires and the series-first construction.  It’s a somewhat bold move, but I suspect BionX has done their homework here.  Apparently the self balancing behavior is a side effect of the spinel manganese oxide chemistry - it’s a characteristic of this type of battery.  So as long as the cells wear evenly (which they should, being in the same pack), balancing isn’t a problem!

The battery management system can only detect the bulk pack voltage, not the individual voltage of each cell.  So, it relies heavily on the batteries to remain balanced, otherwise they’ll be at different charged voltages and different capacities.

As for how that works in practice?  I have no idea.  I don’t have a way to test the balance of the back when together and after a few cycles.  Anyone with a live BionX pack want to test cell voltages and see how it does?  However, people who deal with BionX systems rarely report issues with a moderately well maintained battery pack (“Charge it every now and then…”), so I don’t think the battery is a problem.

Overall, it’s a pretty solid pack.  It’s mostly battery, and it’s very well held together by the glue.  I really have no idea how to separate the individual cells for recycling.  Probably a hot knife and some time, plus rewrapping some of the cells.  I’ll see.

I’ll be rebuilding it soon.

How’s your BionX pack holding up? 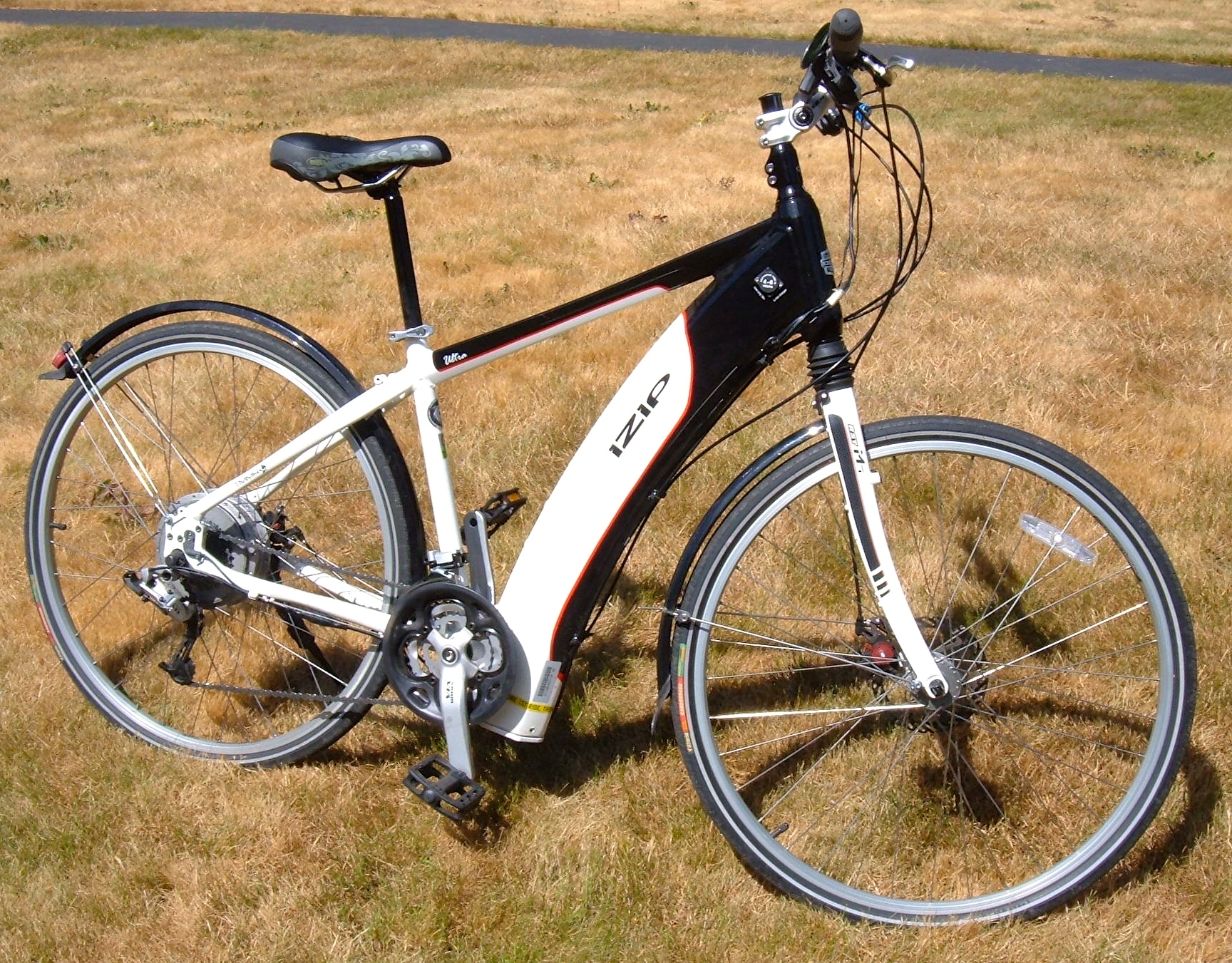 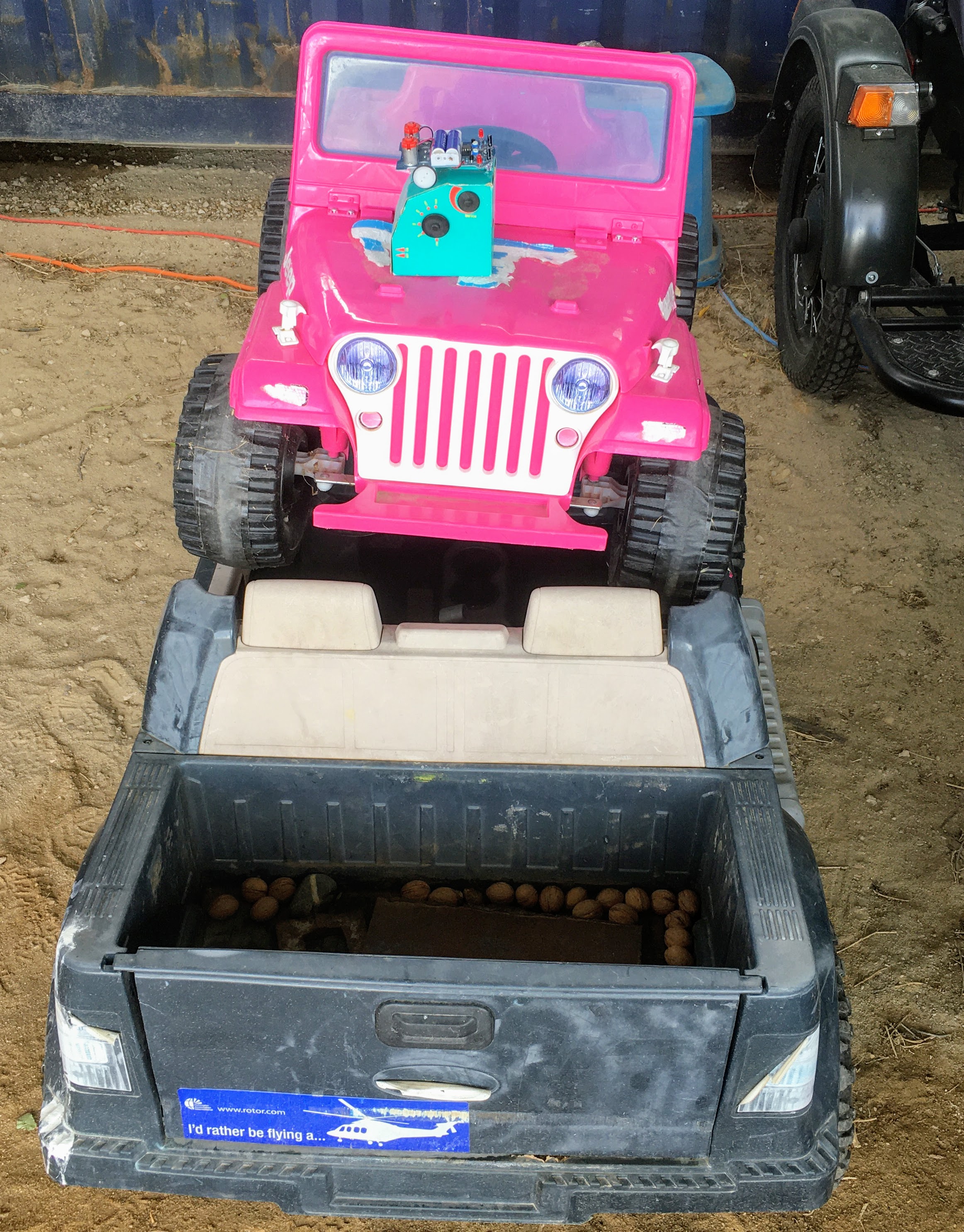