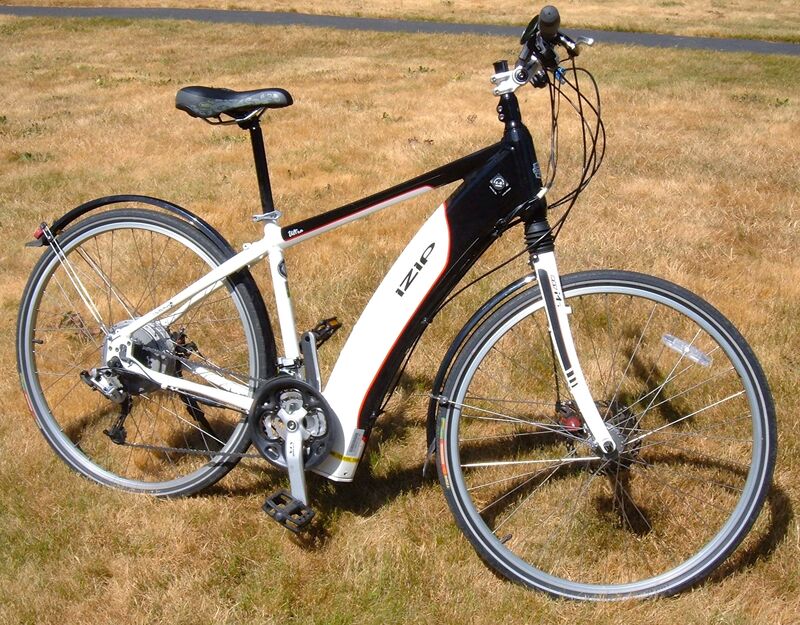 This new-to-me bike came stone dead (as far as the “electric” part of it was concerned).  It now lives with a freshly rebuilt battery pack!  So, that raises the question: How is it to ride?

There were a few issues for early owners of these bikes - broken spokes in the rear were a common complaint.  However, this isn’t a problem on mine, because the previous owner replaced all the rear spokes.  He also replaced the cables to deal with some snagging issues, and I don’t think it has slime in the tubes right now (apparently it solidifies if the wheels don’t move for long enough).

I’ve been using this for potting around locally since I finished rebuilding the pack (for those not familiar, I rebuilt the 10AH stock pack as a ~14AH pack), and I think I’ve got a slight feel for the character and nature of the bike now.

Which is: This is really a cruiser style bike with road tires that happens to love climbing hills.

For more information and many more photos, keep reading.

The bike is a pretty standard, tall bike.  I’ve ridden many like it over the years, so it feels reasonable.  The seat is very wide and I personally find it rather uncomfortable for longer rides, though my daily driver has a very narrow seat on it.  It’s something I should consider changing out, but probably won’t.

The riding position is very tall.  This is great for seeing and being seen!

This bike comes with a 500W motor.  It’s a CURRIE ELETRO DRIVE(R) if you care.

Initially, I wasn’t terribly happy with the power.  I was expecting something similar to my commuter bike, and it’s very much not.  This bike abides by the federal US limit of 20mph under motor assist, and the motor won’t help you beyond that.  It won’t help you much close to that either.

However, if you slow down and ride the bike where it wants to be ridden, around 15mph, it’s quite nice, and the motor does a great job of helping you along when you need it.  It will happily let you do all the work on a flat road or a slight downgrade, depending on the power setting.

The incredible part, though, is hill climbing at low speeds.  This thing climbs hills incredibly well, and in low gears will claw straight up very steep, challenging trails that it’s almost impossible to ride up with similar tires (without a motor).  The motor smooths out the power delivery and it just claws up the gravel and dirt like a mountain goat.  It’s not an offroad bike, but it’ll sure fake it!

I think most of the behavior comes down to the sensor system being a torque sensing system, combined with a desire to be smooth and meet federal regulations.  Climbing hills is a low speed, high torque activity, and the motor is pretty much running wide open.  High speed running is lower torque (combined with the limits in motor output at higher speed), so it won’t assist as much.  Assisting fully up to 20mph and then cutting entirely would be a poor riding experience, so it feels like there’s a taper in power delivery above about 17mph.

Once you learn what to expect, it’s really quite nice!

One glitch I’ve found is that walking the bike on a rough surface will sometimes engage the motor if the rear wheel bounces.  So be careful walking it over railroad tracks or such (if they’re not a level crossing).

Another issue I’ve noticed occurs at low speeds and tight corners (such as climbing a set of switchback ramps for a pedestrian/bike overpass).  The motor won’t run until the bike is moving, but if you’re moving slowly and turning tightly, the motor will occasionally add power at very much the wrong time, and can make things a bit exciting (especially if it’s slick out and the front wheel is turned sharply).  Fortunately, the brake lever cutoffs fix this - just depress a brake lever slightly when you don’t want the motor to come on, and it won’t.

It’s unwise to run the bike without the brake cutoffs in place.  If you stop pedaling, the motor continues to provide power for a few seconds.  I tried it for a bit with the cutoffs removed (as that’s how it was when I got it), and… no.  Don’t.  It’s not safe to ride like that.

Another slightly unusual feature of this bike is the front shock.  It’s a single shock, above where the forks split (there’s a bit of a fork gaiter over it).  I’m not sure exactly how it works, but it works just fine - it absorbs moderate bumps just fine.  It’s not a long stroke, but it’s enough.

As to the range on the rebuilt battery pack: I don’t know!  I haven’t come anywhere near running the battery flat, even with 10 mile round trips.  Sometime I’ll go run it flat, but it’s going to take me a lot of miles.  It’s more than long enough to not worry about it.

The brakes are cable operated disc brakes, and are more than up to the task of stopping the bike.  There’s occasionally some noise or feedback in the levers, but as long as you’ve got the brakes adjusted properly (which does have to happen somewhat regularly), they do a wonderful job of bringing the bike down from speed in a hurry.  Remember that the stock brakes have brake cutoff sensors in them, so pressing either brake lever will cut the motor instantly (and you can’t easily replace the brake levers unless they have similar functionality).

The shifters are in the “traditional” position (front chainring on the left, rear sprockets on the right), and work fine - they’re reasoanbly cheap index shifters, but they get the job done.  Since this is a pedal assist bike, there’s no throttle to operate, so this works perfectly.  You really don’t need anything but the largest front chainring most of the time, though.  I only use the smallest chainring for climbing hills I really have no business climbing on this bike.

The power control console is very simple.  There’s an on/off switch (hold to turn off), and a set of buttons to adjust the power delivery.  Yes, it’s upside down - this keeps it below the bars, where it’s a tiny bit less obvious to people if you are on trails that maybe sort of shouldn’t have electric bikes on them.  In theory, of course.

The charger is quite nice.  It uses a 4 pin XLR cable as the interface to the bike, and the bike-side connector is well protected from the elements by a cover.  The charger also has a switch on the back, so you can plug the bike in and then turn the charger on.  The fan is audible while charging, but nothing absurd.

For those who care, the charger is rated 42VDC/4A.

Based on the history of my bike and why the pack is dead, I do suspect that if there’s a power outage, the charger can get into a state where it drains the battery instead of charging it.  So, if there’s a power glitch, cycle the charger afterwards.  Or, just charge the bike and then take it off the charger, though this obviously means you can’t ignore the bike for another few years and expect it to work.

The kickstand is attached to the rear dropouts instead of the center of the frame.  It’s a really nice location for a kickstand, because it doesn’t interfere with the pedal rotation!  You can back the bike up with the kickstand down and not hit the pedals!  Though it does require remembering to bring it up, as it won’t get knocked up by pedal rotation.

It has no lights!  If you actually care about people riding electric bikes, put some lights on the thing.  Or at least run some power so people can install lights.  You have a huge battery pack - a front and rear LED makes a huge difference in being seen, and is quite nice for seeing as well.  Yes, a sticker saying “Do not ride at night!” is cheaper.  I don’t care.  Put lights on your ebike.

I’m not sure if it’s the stock seat or not, but the seat is very wide.  This is probably a personal preference, but I’d prefer a narrower, harder seat that didn’t bulge up in front and press on sensitive male parts.  It’s the type of seat that’s comfortable for a few miles, and miserable after a few dozen miles.

I quite like this bike, though I feel it’s a little bit misleading.  The frame and tires suggest it’s a fairly high speed road bike, and it just isn’t.  It’s a very efficient 15mph cruiser that can chew up hills impressively.

It’s a fairly comfortable ride, and the motor assist is nice.  It’s a surprisingly capable bike in hilly areas, and it’s certainly well suited to “that one hill” - or “those several hills.”  Just don’t ask it to run particularly fast, and you’re fine!

If you can find a used one in good shape, it’s definitely a solid bike, and with the addition of some lights and perhaps a different seat, would be an excellent year round bike.  It’ll even fit snow tires!

As a side note, the difference in the grass color between early May when I posted about my commuter bike and these photos is significant!

Do you have one?  How do you like it?